In 2017, anything related to Blockchain and cryptocurrency was hot property; in 2018, anything linked with blockchain is having a difficult time.

Last year, about 170 hedge funds began trading; in 2018 only 20 new funds have started operations so far. Additionally, chances are 10 percent of the existing funds will close operations this year, due to regulatory uncertainty and market conditions.

Even the stock market had joined the frenzy last year when stocks of companies, joining the Blockchain craze, saw their price skyrocket. This year has been the exact opposite, with most of those stocks plunging.

Last year was a race to forecast the higher targets on Bitcoin. There were all kinds of outrageous targets and various justifications for the same. Now, it’s time to give targets on the downside.

A group of Zurich-based researchers has built a model using the Metcalfe’s law, which shows that Bitcoin’s support is in the market capitalization range of $22 to $44 billion, way lower than the current market cap of $118 billion.

As the prices fall, the news and sentiment will get even more bearish. Tops are formed after a buying mania, similarly, bottoms are formed after panic selling. So, let’s keep our buy list ready and start investing when the charts confirm that a bottom is in place.

In a strong downtrend, the pullbacks only last between 1-3 days. So, after two days of closing in the green, Bitcoin turned down from the $7,711.74 levels. 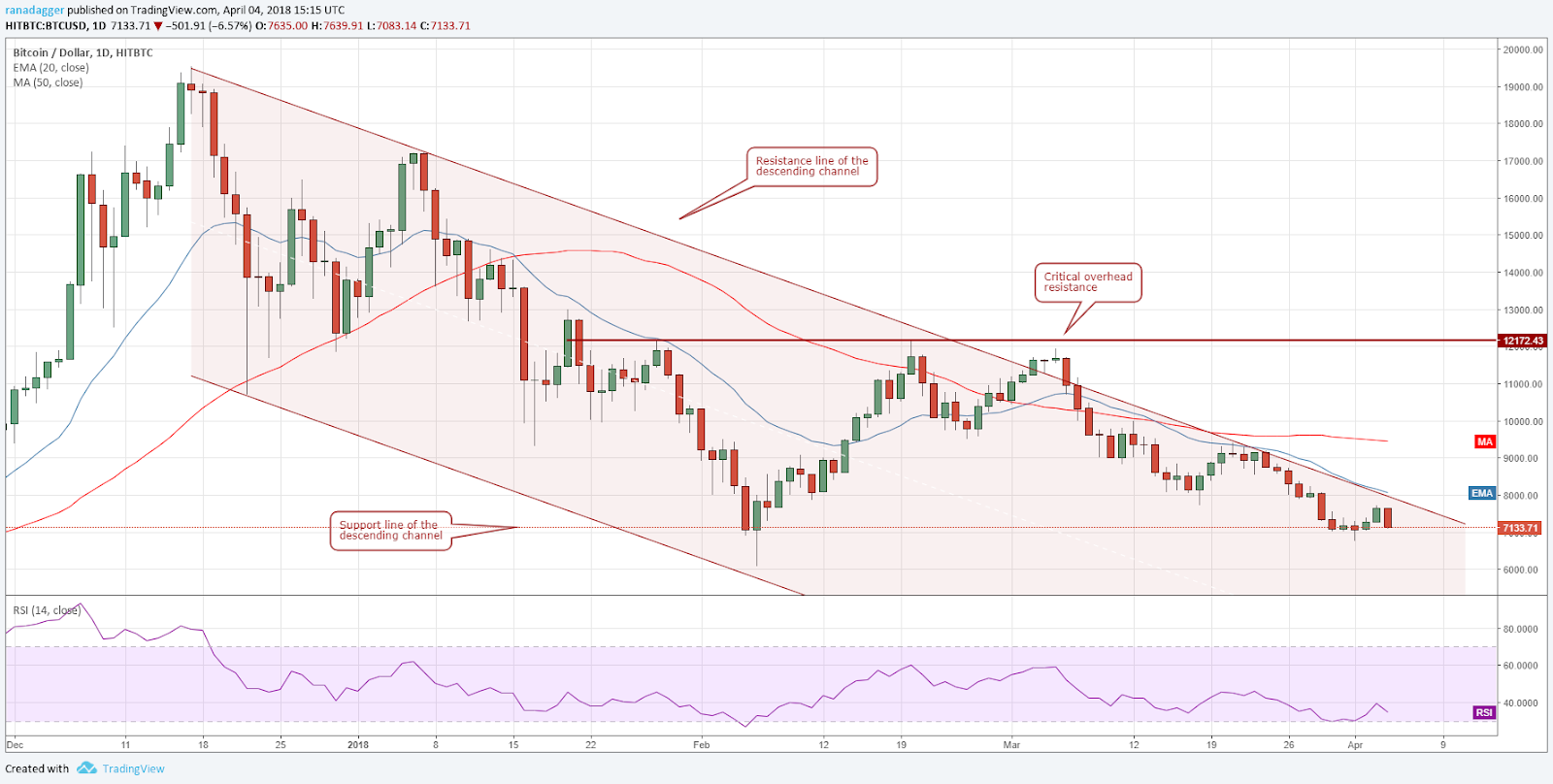 We’ll see the first signs of bullishness when the BTC/USD pair breaks out and sustains above the descending channel. We shall look to buy only if the price sustains above $8,000 levels.

Ethereum closed above the downtrend line on April 03 but could not sustain the breakout. Today, April 04, it has given up all the gains and is threatening to break below the April 01 lows of $358. 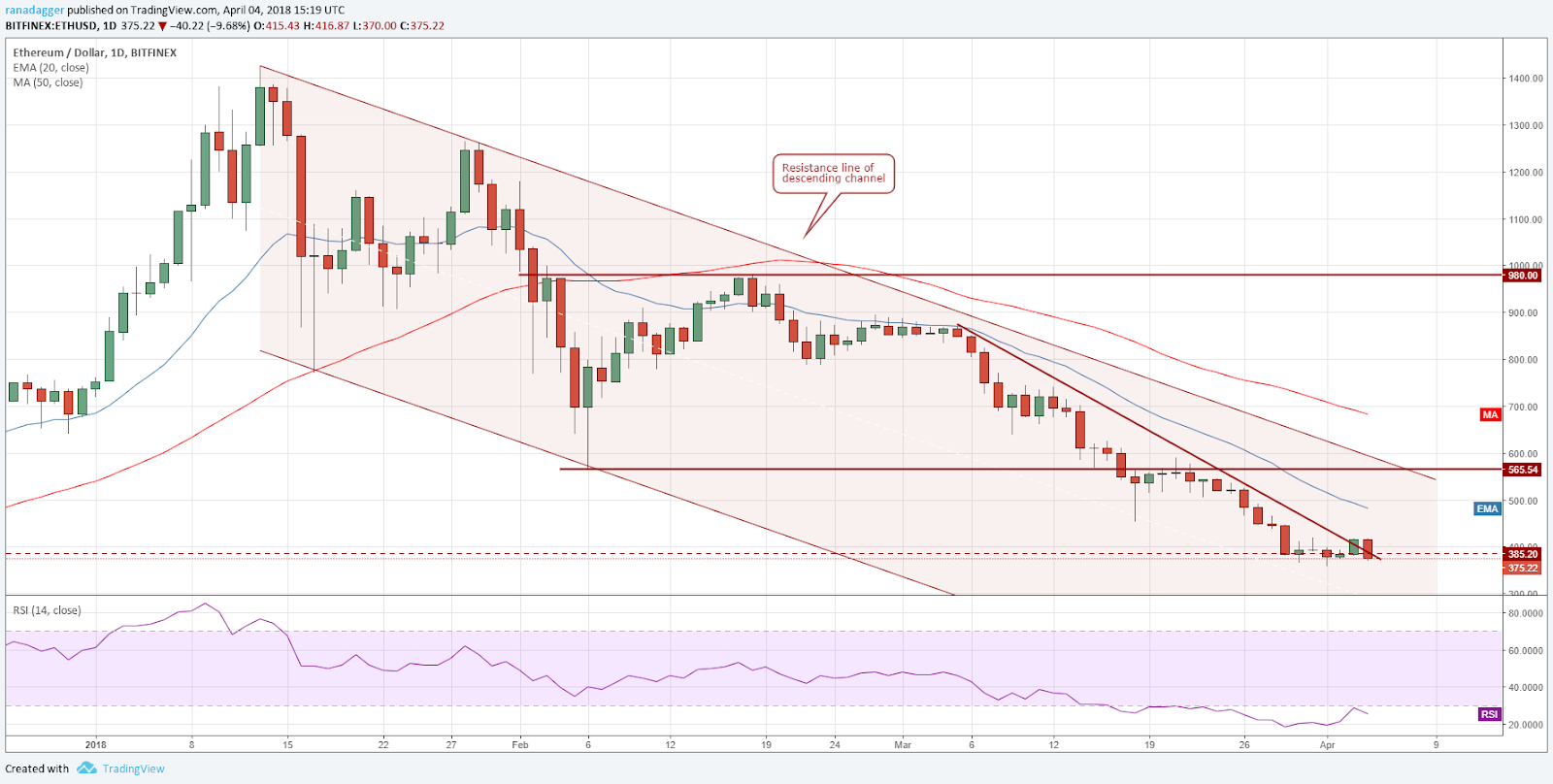 If the bears succeed in breaking down the supports, the ETH/USD pair can slide to $300.

The digital currency remains firmly in a downtrend with both the 20-day EMA and the 50-day SMA falling. We will wait for the trend to change from down to up before suggesting any long positions. We shall wait for the digital currency to change its trend before recommending any trades on it.

The recovery in Ripple could not extend above the overhead resistance of $0.56270, which is a bearish sign. Now, if the price breaks down of the April 01 lows of $0.45351, the downtrend will resume. 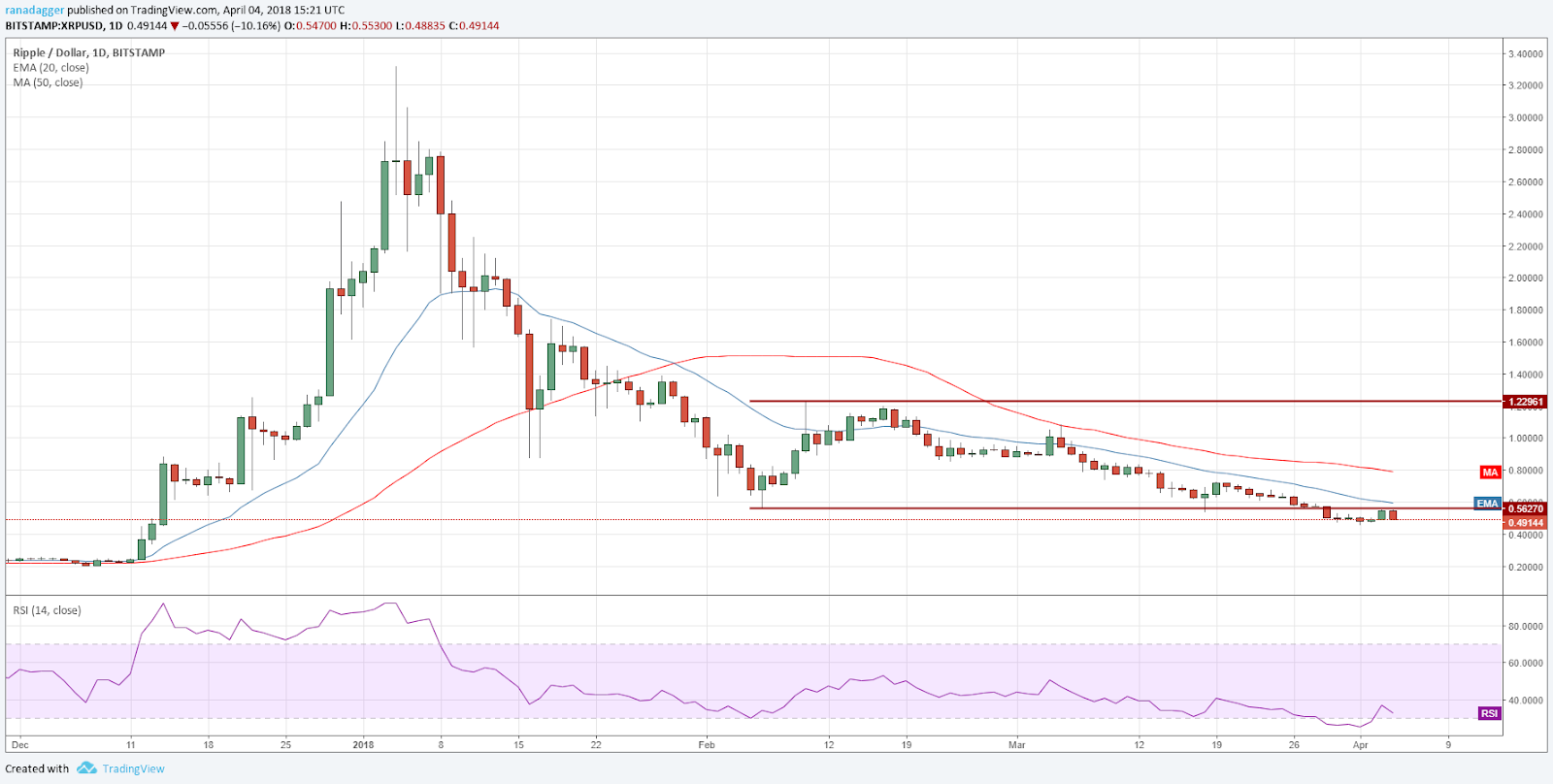 There is no major support until the price reaches $0.22 levels, that’s why it is difficult to predict where the buyers will step in. The XRP/USD pair will show signs of recovery if it rallies and sustains above $0.57 levels for three days.

We aren’t buying during a falling market.

Stellar continues to trade inside the descending channel. It failed to break out of the 20-day EMA on April 03. $0.18 is the critical support on the downside, below which, the fall might extend to $0.16. 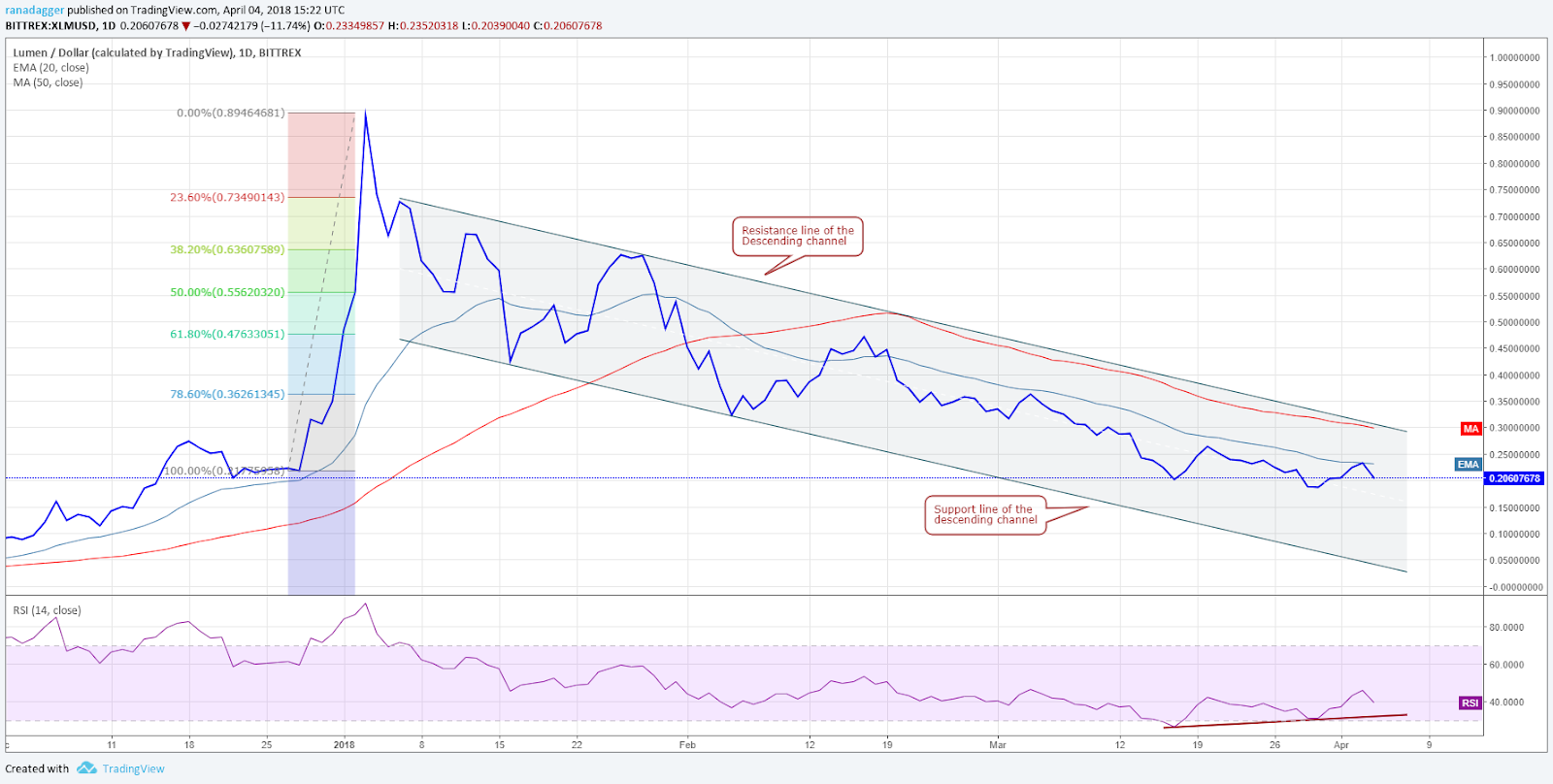 The only bullish development on the chart is the positive divergence on the RSI, but until the price confirms a turnaround, we aren’t suggesting any long positions.

We wait for the XLM/USD pair to break out of the resistance line of the descending channel before initiating any positions.

Litecoin bounced close to the trendline where it faced selling, as we had anticipated. Currently, prices have given back all the gains of April 03. We shall wait for a bottom formation before suggesting any trade on it.

Cardano has been trading inside a range for the past few days. We expect the range bound action to continue until the overall sentiment changes from bearish to bullish. If the ADA/BTC pair breaks out of the range, we anticipate the start of a new uptrend. However, we want to enter a long position only after the price sustains the breakout for more than three days.

Therefore, the recommendation provided in the previous analysis is no longer suitable. We shall wait for the breakout to sustain and then suggest a buy. We don’t want to get caught in a bull trap. If the $44.84 level holds, the bulls will again attempt to pull back to the 20-day EMA. First signs of stability will be seen after the NEO/USD pair sustains above the $65 levels.

We still don’t have a confirmation of a bottom; hence, it is best to wait for now.

EOS continues to trade inside the descending channel. It is currently facing resistance at the 20-day EMA, which is located near the resistance line of the channel. 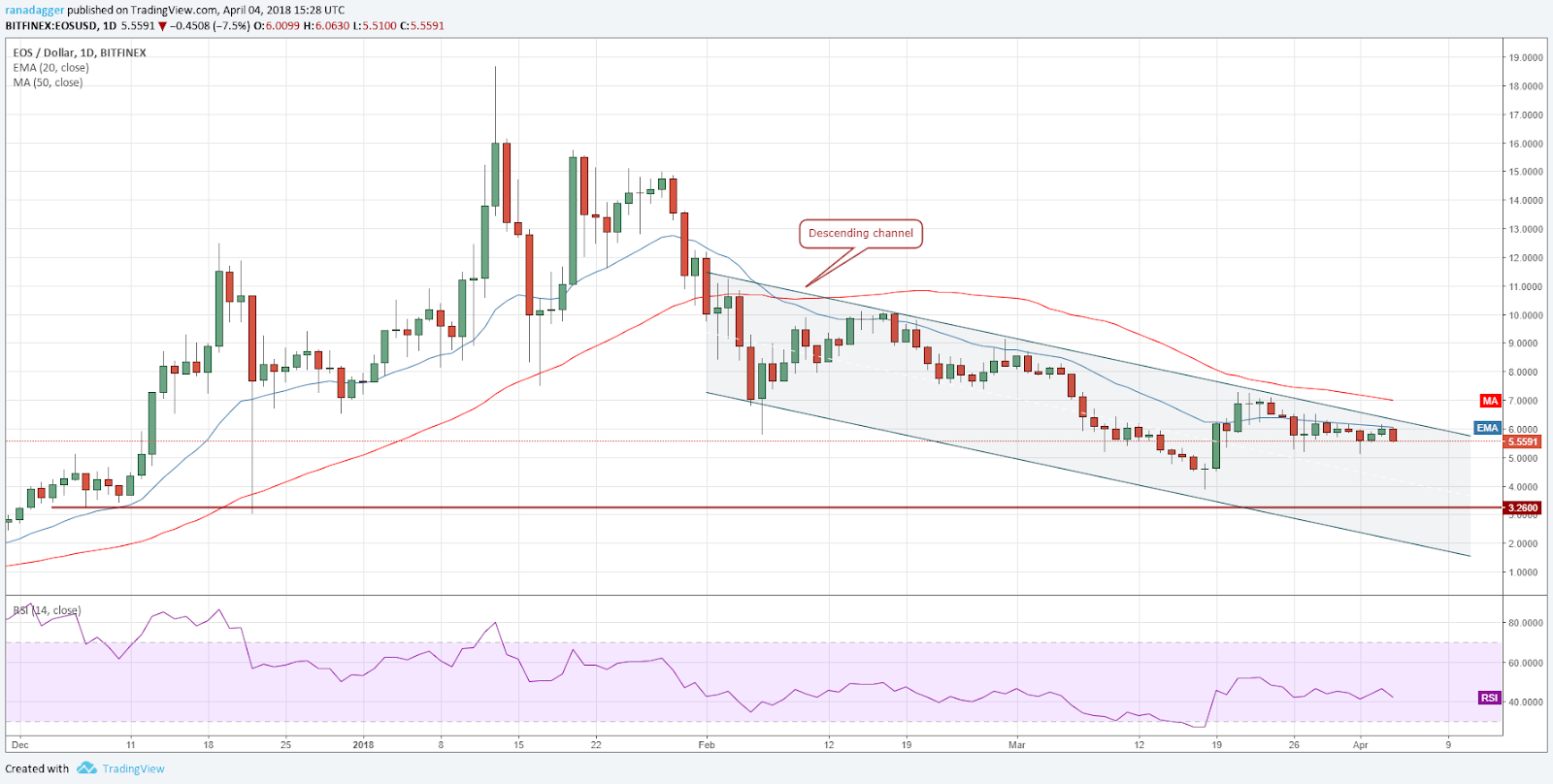 If the bulls succeed in breaking out of the overhead resistance, we anticipate another major resistance at the 50-day SMA.

The EOS/USD pair will become positive only after it breaks out of $7.25 levels. We retain our existing buy recommendation at $7.5 with a stop loss of $5 and a target objective of $11.